Interesting idea, right? The fact that as humans we always make the right decision.

What about that one time that I decided to cheat on a test and got caught? That couldn't have been the right thing.

Or that time that I chose to stay at home instead of go out with my friends? What if I would have met Jean Claude van Damme that night?! Then staying in definitely would have been the wrong choice.

But what about the atrocious things that some humans do to other humans, or animals, or our home, Mother Earth!? Certainly those choices aren't correct.

Before you start cursing me, let me share an excerpt from one of my favorite novels (Ishmael by Daniel Quinn) that opened up my eyes to this idea;

One day (Ishmael began) the gods were considering the administration of the world in the ordinary way, and one of them said, "Here's a spot I've been thinking about for a while-- a wide, pleasant savannah. Let's send a great multitude of locusts into this land. Then the fire of life will grow prodigiously in them and in the birds and lizards that will feed on them, and that will be very fine."

The others thought about this for a while, then one said, "It's certainly true that, if we send the locusts into this land, the fire of life will blaze in them and in the creatures that feed on them-- but at the expense of all the other creatures that live there." The others asked him what his point was, and he went on. "Surely it would be a great crime to deprive all these other creatures of the fire of life so that the locusts and the birds and the lizards can flourish for a time. For the locusts will strip the land bare, and the deer and the gazelles and the goats and the rabbits will go hungry and die. And with the disappearance of the game, the lions and the wolves and the foxes will soon be dying too. Won't they curse us then and call us criminals for favoring the locusts and the birds and the lizards over them?"

Now the gods had to scratch their heads over this, because they'd never looked at matters in this particular light before. But finally one of them said, "I don't see that this presents any great problem. We simply won't do it. We won't raise a multitude of locusts to send into this land, then things will go on as before, and no one will have any reason to curse us."

Most of the gods thought this made sense, but one of them disagreed. "Surely this would be as great a crime as the other," he said. "For don't the locusts and the birds and the lizards live in our hands as well as the rest? Is it never to be their time to flourish greatly, as others do?"

While the gods were debating this point, a fox came out to hunt, and they said, "Let's send the fox a quail for its life." But these words were hardly spoken when one of them said, "Surely it would be a crime to let the fox live at the quail's expense. The quail has its life that we gave it and lives in our hands. It would be infamous to send it into the jaws of the fox!"

Finally one of them had what seemed to be a new thought. "It's clear that any action we take will be good for some and evil for others, so let's take no action at all. Then none of the creatures that live in our hands can call us criminals."

"Nonsense," another snapped. "If we take no action at all, this will also be good for some and evil for others, won't it? The creatures that live in our hands will say, 'Look, we suffer, and the gods do nothing!' "

And hearing all these curses, the gods groaned. "We've made the garden a place of terror, and all that live in it hate us as tyrants and criminals. And they're right to do this, because by action or inaction we send them good one day and evil the next without knowing what we should do. The savannah stripped by the locusts ring with curses, and we have no answer to make. The fox and the grasshopper curse us because we let the quail live, and we have no answer to make. Surely the whole world must curse the day we made it, for we are criminals who send good and evil by turns, knowing even as we do it that we don't know what ought to be done."

Well, the gods were sinking right into the slough of despond when one of them looked up and said, "Say, didn't we make for the garden a certain tree whose fruit is the knowledge of good and evil?"

"Yes," cried the others. "Let's find that tree and eat of it and see what this knowledge is." And when the gods had found this tree and had tasted its fruit, their eyes were opened, and they said, "Now indeed we have the knowledge we need to tend the garden without becoming criminals and without earning the curses of all who live in our hands."

And as they were talking in this way, a lion went out to hunt, and the gods said to themselves, "Today is the lion's day to go hungry, and the deer it would have taken may live another day." And so the lion missed its kill, and as it was returning hungry to its den it began to curse the gods. But they said, "Be at peace, for we know how to rule the world, and today is your day to go hungry." And the lion was at peace.

And the next day the lion went out to hunt, and the gods sent it the deer they had spared the day before. And as the deer felt the lion's jaws on its neck, it began to curse the gods. But they said, "Be at peace, for we know how to rule the world, and today is your day to die just as yesterday was your day to live." And the deer was at peace.

The others nodded and said, "Yes, this is just the way we would have reasoned before we ate of this tree of knowledge."

"What knowledge is this?" the god asked, noticing the tree for the first time.

"Taste its fruit," they told him. "Then you'll know exactly what knowledge it is."

There have been so many times in my life that I have second-guessed myself. Always unsure of whether or not I made the "right" choice or not, even after the fact, when nothing could be different.

And then I realized (after reading this book, which is life-changing and a must read) that as humans we don't really have the knowledge of what is "right" and what is "wrong."

Let me repeat that so it sinks in:

We don't know what is right and what is wrong.

What is right for this may be wrong for that.

Maybe something seemingly wrong or horrible had to happen in order for something more pleasant or seemingly right to occur later on down the line. My opinion is that, as humans, our perception is too narrow to fully understand or comprehend the bigger picture.

Take the life cycle of a flower, for example.

We look at a flower and see its beauty. That flower is "right." We look at decomposing waste and are disgusted. That waste is "wrong." However, we should be able to also see the beauty in the garbage because one day that garbage will become fertilizer. And out of that fertilizer comes a beautiful flower. And then the flower dies and starts to decompose and it becomes garbage again. It is all part of the picture. The beauty is always there to be appreciated in all stages.

Right and wrong are one and the same- they're just happening. We don't need to understand it, we just need to appreciate it.

So that was an extremely long segue to the point of this blog post: my uncertainty surrounding this whole trip.

My feelings before coming on this trip and my feelings now after having a month under our belts is a night and day difference. Looking back I can't help but laugh at how anxious and concerned I was before leaving:

Is this right or wrong to do?!

Is four months too long?

What if I don't like the people we are traveling with?

How will I get any work done?

What if I get sick? (checked that box off already)

How will the holidays be without my family?

What exactly am I getting myself into?

The list could go on for pages. The point is, leading up to this four month adventure I was going back and forth on every possible scenario in my mind, stirring up anxiety and some of those good old self-doubting feelings.

But when we left all of that disappeared.

Acceptance of what is began to permeate my being, and I felt at peace with my choice. Whether embarking on this journey was the right or wrong thing to do, nothing could be different at this point.

I realized that no matter what happened, I was meant to experience it all. The good, the bad, the ugly-- all of it. That is why I am doing this. For the experience. I am doing this for the future me, so that he has memories to share with his future grandkids and wisdom to pass on to them. I am doing this now because there is no better time than NOW.

With a month under our belt I can confidently say that I made the right choice in being here.

Here is our weekly video featuring some of Canggu's beautiful local people and beautiful street art. 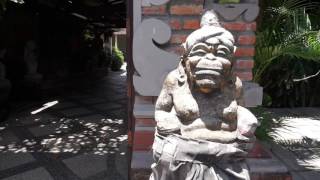 Thousands of Miles, and Many Smiles